The purpose of the paper is to understand a mechanism of evolutionary formation of trapped surfaces when there is an electromagnetic field coupled to the background space-time. Based on the short pulse ansatz, on a given finite outgoing null hypersurface which is free of trapped surfaces, we exhibit an open set of initial data (^χ,αF) for Einstein equations coupled with a Maxwell field, so that a trapped surface forms along the Einstein-Maxwell flow.

On one hand, this generalizes the black-hole-formation results of Christodoulou [3] and Klainerman-Rodnianski [13]. In fact, by switching off the electromagnetic field in our main theorem, we can retrieve their results in vacuum. On the other hand, this shows that the formation of black hole can be purely due to the condensation of Maxwell field on the initial null hypersurface where there is no incoming gravitational energy.

This work was partly done when the author was a graduate student at Princeton University and afterwards when he was visiting Harvard University. He would like to thank these institutions for their hospitality. The author is deeply indebted to Professor Sergiu Klainerman and Igor Rodnianski for many fruitful discussions on the problem. The author also would like to acknowledge Professor Demetrios Christodoulou and Shing-Tung Yau for explaining the insights and continuous encouragements.

The famous singularity theorem of Penrose (see [5]) states that if in addition to the dominant energy condition, the space-time has a trapped surface, namely a two dimensional space-like sphere whose outgoing and incoming expansions are negative, thus the space-time is future causally geodesically incomplete (we usually say that the space-time contains a singularity). The weak cosmic censorship conjecture asserts there is no naked singularity under reasonable physical assumptions. In other words, singularities need to be hidden from an observer at infinity by the event horizon of a black hole. Thus, by combining these two claims, if one can exhibit a trapped surface in a space-time, then one can predict the existence of black holes. In other words, although many supplementary conditions are required, we regard the existence of a trapped surface as the presence of a black hole.

A major challenge in general relativity is to understand how trapped surfaces actually form due to the focusing of gravitational waves. In a recent remarkable breakthrough [3], Christodoulou solved this long standing problem. He discovered a mechanism which is responsible for the dynamical formation of trapped surfaces in vacuum space-times. In the monograph [3], in addition to the Minkowskian flat data on a incoming null hypersurface, Christodoulou identified an open set of initial data (this is the short pulse ansatz) on a outgoing null hypersurfaces. Based on the techniques developed by himself and Klainerman in the proof of the global stability of the Minkowski space-times [4], he managed to understand the whole picture of how the various estimates on geometric quantities propagates along the evolution. Once those estimates are established in a large region of the space-time, the actual formation of trapped surfaces is easy to demonstrate. Christodoulou also proved a version of the same result for the short pulse data prescribed on past null infinity. He showed that strongly focused gravitational waves, coming in from past null infinity, lead to a trapped surface. This miraculous work provides the first global large data result in general relativity (without symmetry assumptions) and opens the gate for many new developments on dynamical problems related to black holes. The methods undoubtedly have many future applications in both general relativity and other partial differential equations.

In [13], Klainerman and Rodnianski extend aforementioned result which significantly simplifies the proof of Christodoulou (from about six hundred pages to one hundred and twenty). They enlarge the admissible set of initial conditions and show that the corresponding propagation estimates are much easier to derive. The relaxation of the propagation estimates are just enough to guarantee that a trapped surface still forms. Based on the trace estimates developed in a sequence of work [7], [8], [9], [10], [11] and [12] towards the critical local well-posedness for Einstein vacuum equations, they reduce the number of derivatives needed in the argument from two derivatives on curvature (in Christodoulou’s proof) to just one. More importantly, Klainerman and Rodnianski introduce a parabolic scaling in [13] which is incorporated into Lebesgue norms and Sobolev norms. These new techniques allow them to capture the hidden smallness of the nonlinear interactions among different small or large components of various geometric objects. The result of Klainerman and Rodnianski can be easily localized with respect to angular sectors which leads to further developments, see [14] for details. We remark that Klainerman and Rodnianski only considered the problem on a finite region. The question from past null infinity can be solved in a similar manner as in [3] once one understand the picture on a finite region. The problem from past null infinity has also been studied in a recent work [16] by Reiterer and Trubowitz.

The aforementioned works are all investigating vacuum space-times. When some matter field is presenting, the formation of black holes has attracted a lot of interest. We mention only two of them which are more related to the present paper. In [15], based on their work on positive mass theorem, especially the resolution of Jang’s equation, Schoen and Yau proved the existence of a trapped surface when matter is condensed in a small region, see [17] for an improvement. Their result is restricted to the initial 3-slice hence is not dynamical. Another work is an earlier paper [2] of Christodoulou. He studied the evolutionary formation of singularities for the Einstein-scalar field system. The radial symmetry is assumed and the mechanism of the formation of trapped surface is quite different to his most recent work [3]. And moreover, he could get more precise information on the gravitational collapse.

The purpose of the present paper is, under the framework of Christodoulou and Klainerman-Rodnianski, to understand the formation of charged black holes, namely the evolutionary formation of trapped surfaces when there is an electromagnetic field coupled to the background space-time. On one hand, we will generalize the black-hole-formation results of Christodoulou and Klainerman-Rodnianski. In fact, by switching off the electromagnetic field in our main theorem, we can retrieve their results in vacuum. On the other hand, we will show that the formation of black hole can purely due to condensation of Maxwell field on the initial null hypersurface, namely, we can set the incoming gravitational energy to be zero.

We recall double-null-foliation formalism and we refer the reader to Chapter 3 of [6] for more precise descriptions. We use D=D(u∗,u––∗) to denote the underlying space-time and use g to denote the background metric. We assume that D is spanned by a double null foliation generated by two optical functions u and u–– and we also assume that u and u–– increase towards the future, 0≤u≤u∗ and 0≤u––≤u––∗. We use Hu to denote the outgoing null hypersurfaces generated by the level surfaces of u and use H––u–– to denote the incoming null hypersurfaces generated by the level surfaces of u––. We use Su,u–– to denote the space-like two surface Hu∩H––u––. We denote by H(u––1,u––2)u the region of Hu defined by u––1≤u––≤u––2; similarly, we can define H––(u1,u2)u––.

We require that when u––≤0, this part of initial null cone H0 is a flat light cone in Minkowski space-time. 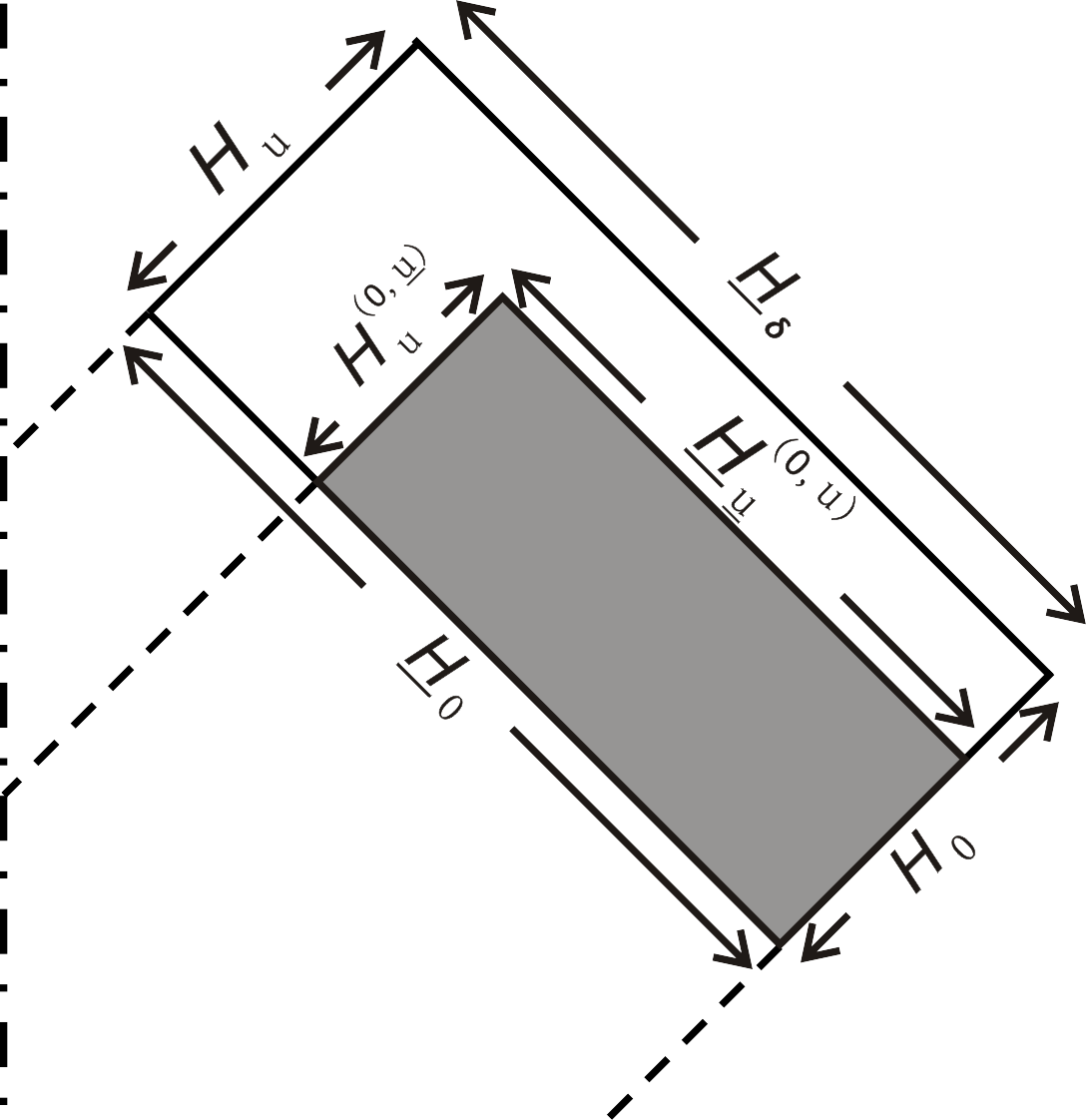 The shaded region represents the domain D(u,u––). The function u–– is in fact defined from −u∗ to δ. When u––≤0, this part of H0 is assumed to be a flat light cone in Minkowski space-time with vertex located at u––=−u∗. We shall show that the trapped surface forms when u––∼1 and u=δ. We also require that u∗ is a fixed number which is at least 2, say, we may take u∗=2.

We use D to denote Levi-Civita connection of the metric g and we define the connection coefficients,

For a Weyl field W, the null decomposition adapted to the null frame {eα} is 222  When W is equal to Weyl curvature tensor, we use α,α––,β,β––,ρ,σ to denote its null components.

where ∗W is the space-time Hodge dual of W.

The Maxwell field Fαβ is coupled to the background geometry, namely, in addition to (1.1), Fαβ satisfies Einstein field equations,

where Rαβ is Ricci curvature, R is scalar curvature and the Tαβ is the energy-momentum tensor associated to Fαβ defined as

where ∗F denotes the space-time Hodge dual of F. The symmetry between F and ∗F in above expression plays an important role when we derive energy estimates.

We also decompose F in a given null frame into null components, 333  We use shorthand symbols αF, βF, ρF and σF to denote these components.

On two surface Su,u––, we define the scare invariant Lp norms,999  We use shorthand notation ∥ϕ∥Lp(sc)(u,u––) for this norm.

By definition, scale invariant norms come up naturally with a small parameter δ. Roughly speaking, it reflects the smallness of the nonlinear interactions in our problem. One key aspect of this principle is the scale invariant Hölder’s inequality,

where 1p=1p1+1p2. Similar inequalities hold along incoming and outgoing hypersurfaces. We emphasize the rule of thumb for treating the nonlinear terms.

For a product of terms each use of Hölder’s inequality gains a δ12.

In this sense, nonlinear terms are better than linear terms. Other other hand, there are nonlinear terms where we do not gain any power in δ. If f is a bounded (in usual sense) scalar function (bounded by a universal constant), the best we expect is ∥f⋅ϕ∥Lp(sc)≲∥ϕ∥Lp(sc). 101010  This is the case for f=trχ––0=42r0+u––−u appearing frequently in the paper.

In those definitions, some terms come up with a δ12, for example, α in R0. Those terms are understood to cause a loss of δ−12. We call them anomalies or being anomalous. By convention, we do not regard β and βF as anomalies, since they are not anomalous on outgoing lightcones. In sequel, we shall encounter other terms which cause a loss of δ−12. By abuse of language, we will call them anomalies too. And, for those non-anomalous terms, in schematic notations, we usually use a g as a subindex, for example, we use (∇Ψ)g to denote ∇α.