Closed meanders are planar configurations of one or several disjoint closed Jordan curves intersecting a given line or curve transversely. They arise as shooting curves of parabolic PDEs in one space dimension, as trajectories of Cartesian billiards, and as representations of elements of Temperley-Lieb algebras.

Given the configuration of intersections, for example as a permutation or an arc collection, the number of Jordan curves is unknown and needs to be determined.

We address this question in the special case of bi-rainbow meanders, which are given as non-branched families (rainbows) of nested arcs. Easily obtainable results for small bi-rainbow meanders containing up to four families suggest an expression of the number of curves by the greatest common divisor (gcd) of polynomials in the sizes of the rainbow families.

We prove however, that this is not the case. In fact, the number of connected components of bi-rainbow meanders with more than four families cannot be expressed as the gcd of polynomials in the sizes of the rainbows.

Looking for a closed formula of the number of connected components, the nose-retraction algorithm is as good as a gcd-formula and therefore as good as we can possibly expect. 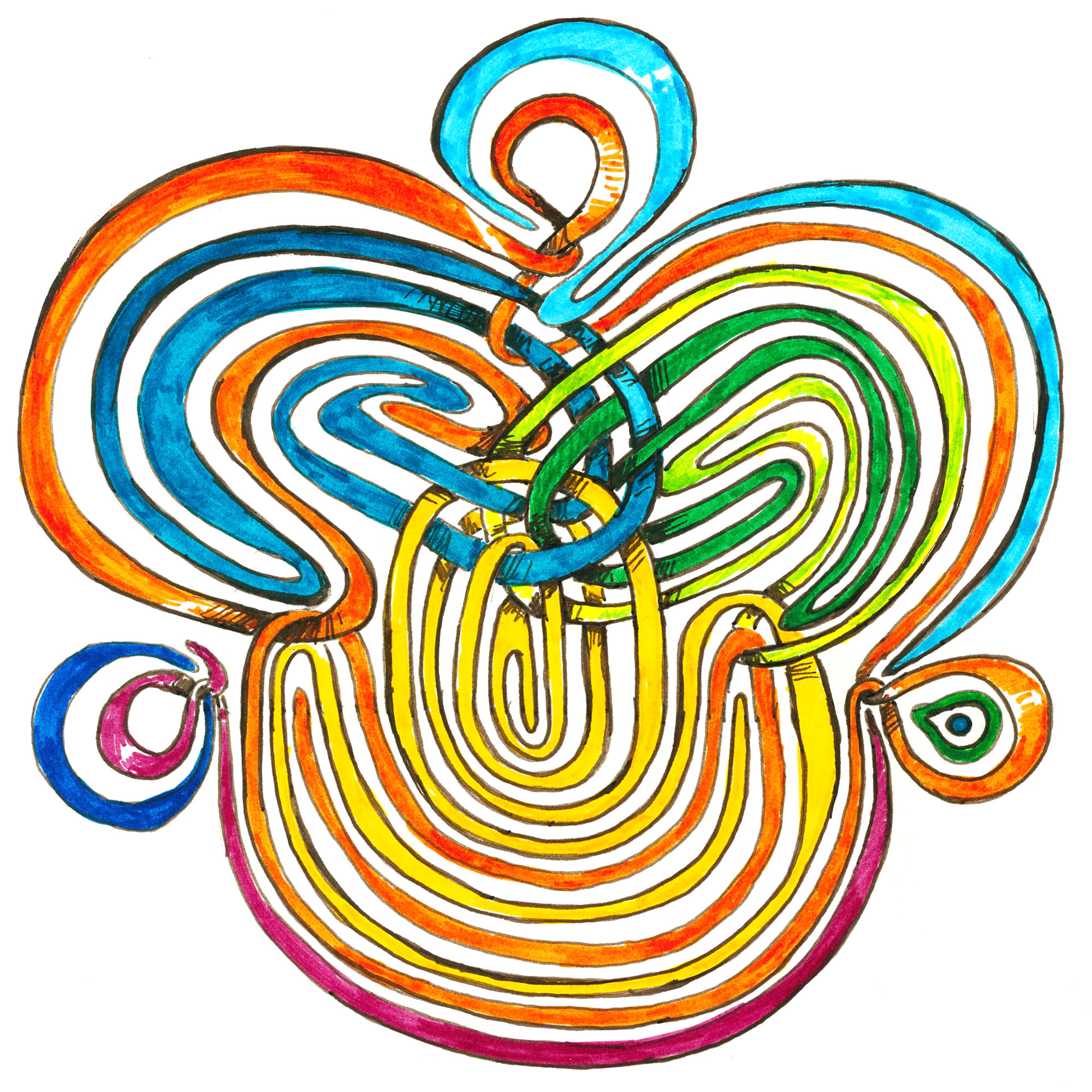 Meander curves in the plane emerge as shooting curves of parabolic PDEs in one space dimension [FR99], as trajectories of Cartesian billiards [FC12], and as representations of elements of Temperley-Lieb algebras [DGG97].

In general, we regard closed meanders as the pattern created by one or several disjoint closed Jordan curves in the plane as they intersect a given line transversely. The pattern of intersections remains the same when we deform the curves into collections of arcs with endpoints on the horizontal axis, see figure 2.1.

We study the subclass of bi-rainbow meanders, which are composed of several non-branched families of nested arcs above and below the axis, see figure 2.7 and definition 2.4. This subclass also appears naturally as representations of seaweed algebras [CMW12]. For less than four upper families, the number of curves of the meander is given as the greatest common divisor of expressions in the sizes of the families,

see (6.1) and [FC12]. It is tempting to conjecture the existence of similar “closed” expressions for general bi-rainbow meanders. However, in section 5, we prove that there are severe obstructions:

After this partly negative result, we could look for more complicated formulae. Instead of that, we shall shift our viewpoint a little bit. We argue, that the gcd is an abbreviation for the Euclidean algorithm rather than an “explicit” expression. The Euclidean algorithm has logarithmic complexity: It requires O(logα1+logα2) steps to determine gcd(α1,α2). Conversely, any formula for the number Z of connected components also provides a formula for the gcd.

Therefore, whatever “closed” formula we find, it cannot be of smaller complexity. In section 6 we provide algorithms which calculate the number of connected component by nose retractions, which we introduce in section 4. They have a structure very similar to the Euclidean algorithm. They also have the same logarithmic complexity. Although the search for exact gcd expressions might be futile, we still find a gcd-like interpretation of the number of connected components of meanders.

Both authors have been supported by the Collaborative Research Centre 647 “Space–Time–Matter” of the German Research Foundation (DFG). We thank Bernold Fiedler, Pablo Castañeda, and Vincent Trageser for useful discussions and encouragement.

We start with one or several disjoint closed Jordan curves in the plane, intersected by a given line — without loss of generality the horizontal axis. By homotopic deformations, without introduction or removal of intersections, the curve can be represented by collections of arcs above and below the horizontal axis. Both collections have the same number α of disjoint arcs and hit the axis in the same 2α points {1,…,2α}, see figure 2.1. There are now several possibilities to represent a meander.

2.1 …as a pair of products of disjoint transpositions

Each arc connects two points on the axis and thus defines a transposition. The arc collections above and below the axis can both be represented as products of the disjoint transpositions given by their arcs. The example in figure 2.1 reads

in the common cycle representation of permutations. Such a product of disjoint transpositions represents a disjoint arc collection if, and only if, no pair of transpositions is interlaced, i.e.