Towards Engineering Intrinsic Linewidths and Line-Broadening in Perovskite Nanoplatelets

Perovskite nanoplatelets possess extremely narrow absorption and emission linewidths, which are crucial characteristics for many optical applications. However, their underlying intrinsic and extrinsic line-broadening mechanisms are poorly understood. Here, we apply multi-dimensional coherent spectroscopy to determine the homogeneous line-broadening of colloidal perovskite nanoplatelet ensembles. We demonstrate control of not only their intrinsic linewidths, but also control of various broadening mechanisms by tuning the platelet geometry. Remarkably, we find that decreasing nanoplatelet thickness by a single polyhedral layer results in a 2-fold reduction of the inhomogeneous linewidth and a 3-fold reduction of the intrinsic homogeneous linewidth to the sub-meV regime. In addition, our measurements suggest homogeneously broadened exciton resonances in 3-layer (but not necessarily 4-layer) nanoplatelets at room-temperature. 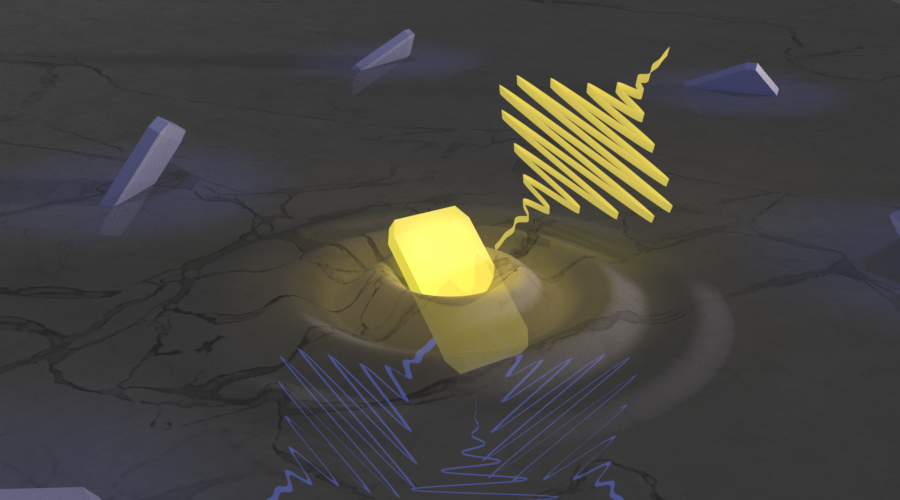 Metal-halide perovskites are a class of materials that have attracted tremendous interest in recent years due to their superior performance in electronic transport and optical interactions Herz2016, Lozano2018, Zhao2019, Fu2019. In particular, lead-halide perovskite nanocrystals, first synthesized in 2015 Protesescu2015, have generated much excitement due to their unique light absorption and emission properties Akkerman2018, Shamsi2019.

Although perovskite nanocrystals were initially limited to nanocube geometries, synthesis of perovskite nanoplatelets was achieved shortly thereafter Bekenstein2015, Tong2016. Perovskite nanoplatelets share the efficient and tunable photo-physics of their nanocube counterparts while possessing unique characteristics of their own. Their planar geometry allows for directional light absorption/emission Jurow2019 and efficient energy transfer in stacked superlattices Rowland2015, while precise control of the polyhedral layer thickness results in remarkable homogeneity in the dominant out-of-plane quantum confinement Weidman2016. Because the absorption and emission energy of nanoplatelets is predominantly determined by the nanoplatelet thickness, variation in lateral confinement of electronic excitations is commonly believed to be negligible.

To perform MDCS we use a Multi-Dimensional Optical Nonlinear Spectrometer Bristow2009, in which three phase-stabilized laser pulses generate a nonlinear four-wave-mixing (FWM) signal as a function of three time delays τ, T, and t (shown in Fig. 1a). Fourier transforming the FWM signal as a function of delays τ and t then generates a two-dimensional (2D) spectra (with conjugate axes ℏωτ and ℏωt) which correlates absorption and emission dynamics Liu2019, Liu2019-2.

Magnitude 2D spectra of 4-layer and 3-layer nanoplatelets are shown in Figs. 3a and 3c respectively. The vertical and horizontal axes represent the absorption and emission energies of the colloidal nanoplatelets as indicated, and the negative absorption energies reflect inverse phase evolution between delays τ and t. The diagonally-elongated lineshapes indicate that, despite dominant out-of-plane quantum confinement, exciton resonances in perovskite nanoplatelets still possess inhomogeneous broadening due to varying confinement of lateral exciton center-of-mass motion. The degree of inhomogeneous broadening depends strongly on layer thickness, which is evident from the difference in diagonal widths between Figs. 3a and 3c.

With increasing temperature, the lineshapes in the cross-diagonal direction broaden, which is characteristic of thermal dephasing due to elastic exciton-phonon scattering Moody2015, Singh2013. Specifically, first-order exciton-phonon scattering processes result in broadening that may be modelled by a linear temperature dependence for the homogeneous linewidth Rudin1990:

where γ0(NX) is the zero-temperature linewidth at a given excitation density NX and the second term represents coupling to low-energy acoustic phonon modes with coupling strength A. In anticipation of the experimental linewidth temperature dependence, we neglect broadening due to discrete optical phonon modes that result in a nonlinear increase. To quantify thermal broadening in each system we plot cross-diagonal slices centered at ℏωCD=2045 meV and 2113 meV in Figs. 3b and 3d, which reflect homogeneous broadening of nanoplatelets with resonance energy ℏωCD. The lineshapes fit well to expressions derived for exponential dephasing in the Markovian limit Siemens2010. As the nanoplatelet bandgaps blue-shift with increasing temperature, we adjust the slice locations by a commensurate energy.

The temperature dependent values of the homogeneous linewidth γ (each fitted from a 2D spectrum taken at its respective temperature) are plotted in Fig. 4. By extrapolating to zero-temperature, we find drastically different intrinsic linewidths of γ0=0.45 meV (3-layer) and 1.67 meV (4-layer). To explain this surprising observation, we note that optical linewidths are fundamentally limited by the excited population relaxation rate. In colloidal nanocrystals, the dominant population relaxation channel is a spin-flip process between an optically-active bright-exciton manifold and an optically-inactive dark state which inhibits light-emission Accanto2012, Masia2012. Decreasing nanoplatelet thickness (increasing electron-hole exchange interaction) results in a larger bright-dark energy splitting Shornikova2018, and consequently a slower spin-flip relaxation rate. The linewidth also increases linearly with temperature, which is characteristic of acoustic phonon coupling as described by equation (1). The thermal dephasing parameters extracted from the linear fits shown in Fig. 4 are A=0.032 meV/K (3-layer) and A=0.045 meV/K (4-layer), which indicate relatively weaker acoustic phonon coupling in the former. Weaker vibrational coupling in 3-layer nanoplatelets is also reflected in their smaller thermal band-gap renormalization (shown in Fig. 2). Both values are comparable to that of similar two-dimensional systems such as monolayer WSe2 (0.06 meV/K) Moody2015 and quantum wells (≈0.01 meV/K) Schultheis1986-2.

Another dominant extrinsic dephasing mechanism in semiconductors is excitation-induced dephasing (EID) Wang1994, Shacklette2002, Moody2015, which arises from electronic many-body interactions. Our narrow excitation bandwidths, well-matched to the probed exciton resonances, restricts the source of EID to exciton-exciton scattering Schultheis1986, Moody2015. In two-dimensional systems, this may be described by a linear dependence on excitation density NX for the homogeneous linewidth:

where γ(T) is the zero-density linewidth at temperature T and B is the exciton-exciton interaction strength. The excitation densities are calculated from the experimental laser parameters and sample optical density.

The homogeneous linewidth at 10 K is plotted in Fig. 6a as a function of excitation density for both 3-layer and 4-layer nanoplatelets. We find that the linewidth increases linearly with excitation density for both thicknesses and reaction temperatures, a clear signature of EID, as described by equation (2). The EID parameter B for 4-layer nanoplatelets synthesized at both temperatures is then plotted as a function of slice location in Fig. 6b, which, most notably, exhibits a rapid increase in EID below 2055 meV. The sharp increase in EID with decreasing resonance energy for 170∘C nanoplatelets may be understood by noting the linear dependence of absorption cross-section on lateral area Yeltik2015 and by considering the effect of nanoplatelet size on multiple exciton dynamics. In large nanoplatelets (smaller resonance energy) multiple excitons may form, which may then undergo scattering events that result in EID. Generation of multiple excitons becomes favorable once the nanoplatelet size exceeds the exciton Bohr diameter in CsPbI3 of 12 nm Protesescu2015, which agrees with the mean edge length of 12.4 nm measured for the 170∘C nanoplatelets. The observed increase in EID beyond 2055 meV (with decreasing nanoplatelet size) is unexpected, which we speculate as due to polaronic effects that result in increasing sensitivity to EID Roy2011. Because the nanoplatelet size is still comparable to the exciton Bohr radius, the EID parameters measured here are much smaller than the EID parameter in, for example, monolayer WSe2 (2.7×10−12 meV cm2 Moody2015). We note that the EID parameter measured for 3-layer nanoplatelets (B=1.43×10−14 meV cm2) lies between the range of values measured for 4-layer nanoplatelets synthesized at the same temperature, which indicates minimal effect of nanoplatelet thickness on EID in this size regime.

In conclusion, we have measured the intrinsic homogeneous linewidth and its broadening mechanisms in CsPbI3 perovskite nanoplatelets as a function of platelet geometry. By informing the relevant design parameters for optical resonances, our results are directly relevant for implementing colloidal nanoplatelets in practical devices. For example, we find that large-area nanoplatelets offer advantages such as narrow intrinsic homogeneous linewidths and lower thermal broadening, and are therefore likely to be advantageous in coherent opto-electronic devices. However, small-area nanoplatelets (that suppress multiple exciton formation) may be required for narrow and stable exciton resonances in high optical intensity applications. We realize the narrowest, sub-meV intrinsic linewidths by reducing the nanoplatelet thickness to a mere three polyhedral layers, which represents an important step towards engineering ideal atom-like emission from colloidal materials.

CsPbI3 nanoplatelets were synthesized according to a procedure detailed elsewhere Bonato2020. Briefly, 15 mg of Cs2CO3 and 158 mg of Pb(acetate)23H2O were loaded into 50 mL, 3-neck flask along with 1 mL of oleic acid (OA), 0.5 mL of oleylamine (OLA) and 4.5 mL of 1-octadecene (1-ODE). The mixture was kept at 100∘C for 1 hour under reduced pressure. After complete degassing of the mixture, the system was kept under nitrogen flowing and heated-up until the specified reaction temperature (either 110∘C or 170∘C). Then, a solution containing 130 mg of SnI4 in 1 mL of 1-ODE, 0.5 mL of OA and 0.5 mL of OLA (all solvents were pre-degassed before using) was swiftly injected. The mixture was rapidly placed into a water bath until room temperature. The nanoplatelets were separated from the crude solution by centrifugation at 13,500 rpm for 10 minutes and re-suspended with anhydrous n-hexane.

The CsPbI3 nanoplatelets are suspended in heptamethylnonane, a branched alkane that forms a transparent glass at temperatures below 100 K. The colloidal suspension is held between two sapphire windows in a custom sample holder approximately 0.5 mm thick, which is then mounted to a liquid helium cold-finger cryostat and cooled to cryogenic temperatures.

The excitation laser pulses used to perform multi-dimensional coherent spectroscopy (MDCS) are generated at a 250 kHz repetition rate by an optical parameteric amplifier (Coherent OPA 9400) pumped by a regenerative Ti:Sapphire amplifier (Coherent RegA 9000). The FWM signal is isolated by wave-vector phase-matching in the box geometry (shown in Fig. 1b), measured via spectral interferometry Lepetit1995 with a fourth phase-stabilized local oscillator pulse. All pulses are co-linearly polarized and measured to be approximately 70 fs in duration via intensity autocorrelation.

To calculate the exciton excitation density, we use:

where Pavg is the average power per excitation beam, A=1−10−OD is the linear absorbance of each respective nanoplatelet ensemble, r=55μm is the focused beam radius at the sample, frep=250 kHz is the excitation repetition rate, and Eph is the excitation photon energy.

We acknowledge M. Siemens for fruitful discussions. This work was supported by the Department of Energy grant number DE-SC0015782. G.N. and D.B.A. acknowledge support by fellowships from the Brazilian National Council for Scientific and Technological Development (CNPq). L.A.P. acknowledges support from FAPESP (Project numbers 2013/16911-2 and 2016/50011-7). Research was supported by LNNano/CNPEM/MCTIC, where the TEM measurements were performed.